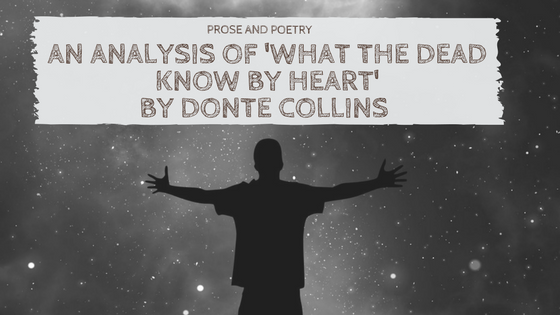 lately, when asked how are you, i
respond with a name no longer living

i am alive by luck at this point, i wonder
often: if the gun will unmake me
is yet made, what white birth

will bury me, how many bullets, like a
flock of blue jays, will come carry my black
to its final bed, which photo will be used

to water down my blood, today i did
not die & there is no god or law to
thank, the bullet missed  my head

& landed in another. today, i passed
a mirror & did not see a body, instead
a suggestion, a debate, a blank

post-it note there looking back. i
haven’t enough room to both rage and
weep. i go to cry & each tear turns
to steam. I say

I matter& a ghost
white hand appears
over my mouth.

This piece analyses the contemporary poem ‘What The Dead Know By Heart’ which was written by Donte Collins. It deals with the issues of the brutal policing of black people from the writers perspective. This piece is very thought-provoking, surreal and send shivers down my spine at the same time. Below is the analysis of the poem.

Structure
This piece is written as a free verse. The free verse structure helps illustrate the writer’s freedom to think and to express his feelings on a topic so connected to him. However, this freedom is contradictory to the topic of the poem because it is not about his freedom in America but rather the lack of. This structure is so important in this poem because it is the one of the few places where we can hear a black man express his opinion without censorship, without restrictions and without the overpowering opinion of white supremacists.

Tone
The tone of this poem is very despondent, bleak and heavy and rightly so, since the poem deals with a bleak, despondent and heavy topic. It begins with a light question which is centred on ‘how are you’ in which he responds as dead through mentioning the names of ‘Rekia, Jamal, Sandra, Philando’ in whom we know their stories and how they suffered from police brutality. Even when positive imagery is used through the sentence ‘flock of blue jays’, it is being used to describe how bullets fly and how it will carry his ‘black’ to his final bed. The use of colour becomes redundant because it is reduced to black which typically signified death.

Punctuation: This poem does not use capital letters and focuses on small letters. Perhaps to illustrate how this issue is bigger than him. It may also illustrate the abudance of his emotion and how overwhelmed he is. The lack of punctuation highlights how the issue is bigger than punctuation and defies the traditional sense of poetry but rather wants us to look into the message deeper.

Enjambment: There are several line breaks in this poem. This could be done to illustrate how broken the poet feels living in such a society which devalues him and others like him.

Theme
This poem deals with how black people are ill treated in America. He highlights the harsh reality that the killing of black people is reduced to ‘a suggestion, a debate. a blank’ but more shockingly the writer wonders if he is murdered by a gun, what picture will be used to ‘water down’ his blood. This highlights the issue of media using images of the murdered to try and make them less human.

Thank you for reading!